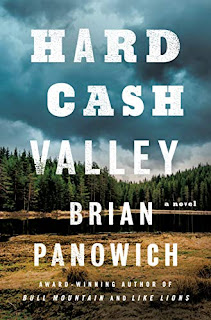 The action is intense, gritty, and recurrent in HARD CASH VALLEY, the third crime novel from Brian Panowich (Minotaur, 2020). It’s the story of Dane Kirby, a fire chief turned consultant to the Georgia Bureau of Investigation. Kirby is sent to Florida to help the Feds investigate the fallout from a brutal murder associated with the victim’s alleged swindling of prize money from the Slasher—the biggest (underground) cockfight in the USA. The Slasher took place at the Farm in Dane’s home turf of McFalls County, which is familiar territory for readers of Panowich’s previous two novels, BULL MOUNTAIN and LIKE LIONS.

Early in the investigation, Kirby is teamed with a hard-nosed FBI agent named Roselita Velasquez and the duo learns that the victim’s younger brother is hiding out somewhere in Georgia. Finding and protecting the boy, who has Asperger syndrome, becomes a driving force that leads Kirby and Velasquez down some harrowing paths in the north Georgia mountains.

The search for the boy follows a trail that becomes increasingly scattered with the bodies of anyone involved in the international cockfighting ring, and Dane Kirby—with his intimate knowledge of the landscape and the players of McFalls County, and a motivation to find and protect the boy—is essential to guiding the investigation while tussling with federal and local law enforcement along the way.

Dane Kirby’s motivation runs much deeper than achieving the satisfaction of a rescue operation. An event in his past—not revealed until near the novel’s end—haunts his existence and drives his energy, and it constitutes a powerful secondary storyline. The profound psychological heaves of love and loss inform nearly every decision Dane makes; those yearnings make him at once more courageous and more fragile. He’s a man trying to live in the physical reality of his world, but the spiritual realms seem, at times, to inhibit his ability to make meaning out of anything.

Panowich’s prose is graceful and addictive. His characters, no matter how minor to the plot are memorable from their first entrance on the page. Take James Edwin, the key holder for Black Mountain Safari Zoo. "The obese man in sweatpants and house shoes fumbled around in the large pocket of his canvas jacket the way a woman would rifle through the insides of a purse until he pulled out a set of keys... ." This is a character you can instantly see in your mind’s eye.

The emotional undercurrents of HARD CASH VALLEY are often wrenching but never melodramatic. This is a deeply affecting and entertaining crime story that rewards the reader with both a memorable payoff to the mystery elements of the plot and a moving conclusion to Dane Kirby’s journey of the soul.