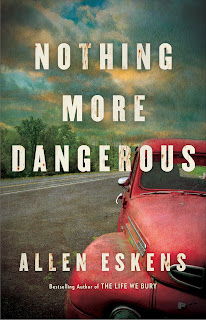 Bicentennial celebrations are on most Americans’ minds in 1976, but for the residents of small town Jessup, Missouri, it’s going to be a long hot summer in NOTHING MORE DANGEROUS, Allen Eskens’s bracing new novel (Mulholland, 2019).

Ah, Missouri. Despite its two major metropolitan areas, the state is profoundly rural, one of those “between” parts of the country that straddles the American heartland and whose people embrace sociocultural aspects of the west, the south and the midwest. This makes it a perfect setting for murder—and for exploring the web of relationships among the townspeople, and the oblique forms of racism, prejudice and sexism that perpetually bubble just below the surface and burst over at contentious moments.

Boady Sanden, fifteen years old, is the hero of the novel. He lives with his widowed mother and is the odd man out at the local private school; he dreams of the day he can escape Jessup for the big city. And then one day, the bookkeeper of the plastics factory—the town’s biggest employer—disappears with a bunch of money. This sets in motion a series of events that turns the town, but most importantly Boady’s life, upside down.

Charles Elgin, from the company’s headquarters in Minnesota, is dispatched to Missouri to oversee the plastics plant and find out what happened to the missing money. Charles, his wife, and his teenage son, Thomas, move in across the street from Boady and his mom and their neighbor, Hoke. The Elgins, though, are different from the other folks. They’re from cosmopolitan and progressive Minnesota, and they also happen to be black, in contrast to deeply white and rural Jessup.

Thomas and Boady develop a fast friendship that tests the historical yoke of in-group loyalty that the other Jessup teens have harnessed onto Boady. And, as cruel manifestations of prejudice by some white extremists in the town become progressively violent, Boady has to become more engaged in his hometown than he would have ever imagined, while mustering the gumption that is foreshadowed in the opening scene of the novel.

Allen Eskens has honed his skills in five previous novels (THE LIFE WE BURY) and in NOTHING MORE DANGEROUS, written a story so absorbing and characters so real that the payoffs feel much more substantial than they otherwise might in a nonseries novel. Eskens takes some risks for a crime novel. The book starts with a slow burn, and there’s no body until about page 139. Some of the surprising twists—and there are plenty—have less to do with the central crime itself, and much more to do with resolving multiple strands of tension and action that have built up over the course of the novel.

NOTHING MORE DANGEROUS is a coming-of-age novel in the best sense. Eskens vividly evokes the ethos of boyhood in the character of Boady, and he does it particularly well by plumbing the teenager’s hopes and fears: from Boady’s daydreaming to his plan for escaping Jessup, to his fears of what length a school bully would go to exact revenge. The novel is written in first-person singular, in Boady’s voice, which is not the easiest technique for this story even though it is clearly the correct choice.

There are a few places early in the book where it appears that Eskens will moralize or preach (given the heady thematic underpinnings of the plot, one could see why), but fortunately, he does not. Instead, Eskens sets the scene thoroughly and takes his time putting flesh on the characters. The payoff is that by the time the pace increases, the reader is totally invested in the characters. The last third of the novel is utterly propulsive, and I consumed the final hundred pages in a white heat of page turning.

A lot happens in the lives of Jessup, Missouri during the summer of ’76. Some things wonderful and some things folks would rather forget. “But memories aren’t like photographs; they can’t halt the passing of time. Instead, they lay like footsteps along a path, each determined by the step that came before and colored by the ones to follow” (pp. 243-244).