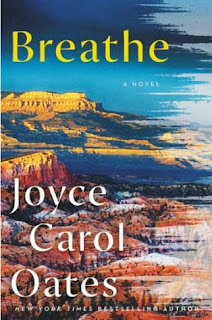 BREATHE (Ecco, 2021) is a major new novel by Joyce Carol Oates that once again plumbs the topic and tributaries of "marriage"--a theme familiar to even the most casual of Oates's reader. It concerns a husband and wife—Gerard and Michaela—who are temporarily living in New Mexico where Gerard is engaged at an academic institute. Michaela’s world tilts, as in an earthquake, when Gerard becomes suddenly and gravely ill, requiring around-the-clock vigil and triggering severe and at times terrifying emotions in Michaela.

The setting of New Mexico’s high desert is unfamiliar territory for Oates (most of her work is set in upstate New York, New Jersey, Detroit), but no less vividly evoked on the page than her usual settings. As always in Oatesworld, the location is inextricably tied to story; the jagged desert escarpments, the “breathless” high altitude, and a pantheon of Pueblo gods haunt the protagonist, Michaela, as she prays/wills her ailing husband’s convalescence.

It is not a spoiler to say that her husband, Gerard, succumbs to cancer and pneumonia, because the focus of the story is on Michaela. One could select from Oates’s vast oeuvre any number of stories/books where a spouse, often a woman but not always, tumbles into a chaotic, self-imposed or self-destructive delirium, at the marital or physical loss/separation of the other spouse. An example of a male protagonist that comes to mind is Jerome “Corky” Corcoran in WHAT I LIVED FOR (1994).

The image of a character jolted into a new and unfamiliar world echoes Oates’s lifetime fascination with Alice in THROUGH THE LOOKING-GLASS, which she credits as one of her earliest influences. For example, Michaela is reminiscent of Ileana from an early Oates story “The Dead,” a takeoff on James Joyce’s story of the same name and collected in Oates’s MARRIAGES AND INFIDELTIES (1972)--a woman under totally different circumstances than Michaela in BREATHE but nonetheless caught in a psychological pressure cooker that leaves her somersaulting through hellacious, personal grief and loss and romance.

Michaela suffers through sustained interior torment in counterbalance to the rudimentary functions of widowhood she must undertake, from the disposition of cremains to the task of finishing Gerard’s last manuscript. Some of this territory is familiar to readers of Oates's searing memoir, A WIDOW'S STORY (2008), about her marriage to Raymond Smith and, especially, the aftermath of his (unexpected) death. If there is autobiography to be found in Gerard, though, it is not principally Smith but Charlie Gross, Oates's second husband and the renowned father of cognitive neuroscience.

Oates renders Michaela’s confused sublimation into widowhood in the hallucinatory, dreamlike prose that has become a hallmark of her long career.  As in her story “The Dead,” Oates employs a number of devices in her narrative style that simulate the  protagonist's psychological unbalancing: shifts between second- and third-person points-of-view, the interrogative mood, elliptical and rhetorically repetitive prose, and so on. This style can be irritating to the reader (as is Oates’s obsessive employment of italicized prose), but it is ultimately effective in creating an indelible literary experience that is at once utterly original and frighteningly familiar.