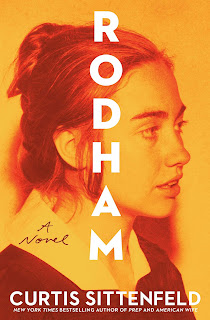 Curtis Sittenfeld’s new novel, RODHAM (Random House, 2020) is one of her best. In short, RODHAM is the alternative autobiography of Hillary Rodham Clinton—part roman à clef, part fantasy novel for progressives and part lamentation for the Hillary that might have been had she not married Bill Clinton.

The novel begins with Hillary’s 1969 Wellesley graduation speech, with its impromptu opening a response to U.S. Senator Edward Brooke’s condescending remarks on political activism that he gave right before hers. This is a great beginning, for it illustrates the first public blaze of political acumen for which Hillary would later become renowned. In the fraught years following 1968, Hillary emerges as a reflective ally in civil rights issues and a conscientious workhorse in legal aid cases (and later as a professor and politician whose drive to help others is a major motivation for her decisions).

The first third of the novel covers her meeting Bill Clinton at Yale, law school, and eventually accompanying Clinton to Arkansas to teach at the Law School at the University of Arkansas in Fayetteville. Some reviewers have cringed at the few somewhat explicit sex scenes between Bill and Hillary, but they comprise just one piece of the larger portrait Sittenfeld creates to illustrate the alluring “aura of Bill Clinton.” At the end of the day, her verdict appears to be that he is a brilliant, charming philanderer—and possibly predator—who churns out Arkansas folksiness to disarm others, and whose soft skills and ability to work a room are otherworldly.

The novel breaks from reality as Hillary drives out of Arkansas leaving Bill in the rearview mirror. From there, she pursues a successful career as a law professor at Northwestern, enjoys solid relationships with her best friend and her family in the suburbs (save her father, Hugh, who is mean and cruel to the women in his life), runs for the U.S. Senate against Carol Moseley Braun, and ultimately runs for president.

This novel is so enjoyable not because it excavates any new territory about the Hillary Clinton we currently know, but because it brilliantly imagines the Hillary that we wanted her to be. That’s a heavy burden for a living person to carry, of course, but for a novel, it is deliciously entertaining. Sittenfeld does give Hillary some foibles, but not many. Hillary admits few missteps in this novel and offers no regrets.

Sittenfeld made the bold choice to write in the first-person, and the voice she gives Hillary is relatable, crisp, sympathetic, and keen. This choice affords us a vantage point into Hillary’s imagined interior life that often makes us feel like we are reading a truly honest memoir.

RODHAM is captivating from beginning to end. It is a work of great imagination that is heartbreaking, compelling, and funny in equal turns. The subject of this book is obviously not for everyone. But Sittenfeld’s dynamic prose and gifted storytelling is engaging for every reader.
Posted by David Chaudoir at 3:00 PM
Labels: 1969, Arkansas, Bill Clinton, Chicago, Clinton, Curtis Sittenfeld, Hillary Rodham, Hillary Rodham Clinton, Illinois, law school, memoir, novel, president, senator, Sittenfeld, Yale
Newer Post Older Post Home