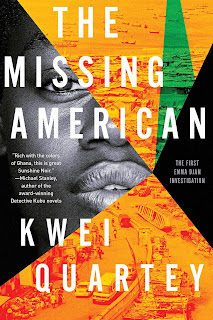 Internet scammers, a political assassination, a mysterious journalist, an intrepid young private investigator, and the fascinating setting of Ghana—these are just a few of the elements that drive the action in Kwei Quartey's exquisite new crime novel, THE MISSING AMERICAN (Soho, 2020).

The bewildering details and rituals of sakawa are vividly rendered by Quartey in his unique and at times hypnotic prose. Where other authors may have glossed over some of these details, Quartey spares us none, which allows the reader a much richer understanding of what is at stake.
We meet several of the sakawa boys and the fetish priest, Kewku Ponsu, from whom they seek their supernatural enablement and around whom they revolve. Ponsu is but one of the memorable characters in THE MISSING AMERICAN.

This is a long novel that is rewarding on a number of levels. The Ghanaian setting will be unfamiliar to most readers, but Quartey is a gifted guide through its sights, smells, and tastes. His rendering of the places, ethnic groups, and even dialects and pidgin English is expert. There are many crimes in the book, not just the internet scams, but of course murder, too. (We know from the title that someone goes missing.) The criminal elements are not much of a shock or surprise; but, like a great work of detection, they are presented and solved alongside the progress Emma Djan makes as the plot unfolds. The suspenseful pulse of the book is derived from the many elements of the plot and subplots that require satisfying resolutions--and Quartey, better than most writers, delivers in tying them up.

Quartey brings alive a corner of Africa by mining realistic details of life and crime in contemporary Ghana and weaving them into a compelling and entertaining narrative. The sakawa boys present a huge challenge in global cybercrime, but also in local politics. Sana Sana appears be based on a real investigative journalist Anas Aremeyaw Anas, who maintains his anonymity almost identically to the way Quartey describes his fictional counterpart. The Ghanaian locations, cities, landmarks, foods, slang are all credibly portrayed and thereby lend the most enjoyable details to this delicious and spellbinding novel.