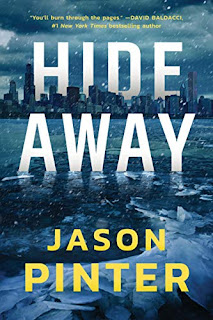 Buckle up and prepare yourself for the thrilling ride that is Jason Pinter’s new novel, HIDE AWAY (Thomas & Mercer, 2020).

This page-turner introduces a new character, Rachel Marin, a witty, resourceful and incisive mother of two whose strong sense of justice is the well-earned outcome of events in her recent past. Rachel’s vigilante tendencies, and her determination to keep the secrets of her past buried, provide for some dramatic entanglements with local detectives who are investigating the apparent murder of a once popular former mayor, Constance Wright.

This scenario sets in motion a complex and layered plot that has elements of police procedure, amateur detection, and even broad humor. At just over 400 pages, the book is rewarding because Pinter invests in every character, so much so that the ending is a juicy and satisfying payoff.

The story takes place in Ashby, Illinois, which is where Rachel moves with her children after experiencing some horrific events in her home state of Connecticut. From Pinter’s descriptions, Ashby feels like a city about the size of Rockford—small enough for people to be familiar with one another, but enough to accommodate a range of wily characters and shenanigans. It’s a place where one can be involved in day-to-day community events but also be anonymous. The city is important to the story.

For the first 200 pages or so, you’ll read and feel entertained and curious, you’ll keep turning the pages. You might fear that you’re approaching that saggy middle part of a novel—but you’re not, not in HIDE AWAY. The action heats up considerably (in fact, there are several action scenes in this book that are superbly written, not an easy feat!), and before long you think you’ve got it figured out. But I promise—you don’t!

The story unfolds more or less chronologically, but a few chapters shift back in time to help fill in background. I liked this approach because I didn’t have to remember everything about Rachel and her life before moving to Ashby.

I love a big crime novel with a meaty, satisfying ending, a reward for all the clue-finding and image-making you’ve done in your mind while living with the characters and their concerns. HIDE AWAY is as good a thriller as you’re likely to read in 2020. I recommend it!