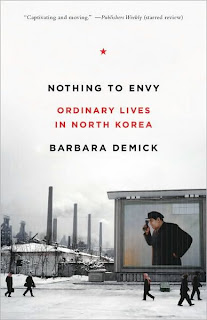 The dire conditions of ordinary North Koreans is one of the world's greatest tragedies, and I cannot imagine a more powerful book to bring the realities of this complex issue into the light. In 2009, Demick told The New Yorker: "Any glimpse of the outside world is corrosive to the regime’s hold over the population. When North Koreans watch soap operas, especially South Korean soap operas, and see ordinary people in kitchens with microwaves and gas stoves, refrigerators filled with food, they realize everything they’ve been told is untrue. They do have something to envy."
Posted by David Chaudoir at 2:15 AM
Labels: Barbara Demick, nonfiction, North Korea
Newer Post Older Post Home